All Lexia ever wanted was to graduate from high school and leave Deadwood.

Now she would give anything to have her quiet life back.

Her Father was murdered and her best friend, Alice kidnapped. With the help of Lincoln, the Panther Shifter she’s fallen in Love with; they rescue Alice. But rescuing her wasn’t as easy as first thought and Lexia and Lincoln barely make it out alive.

Lexia met her Mother, the Mother she thought had left her as a baby. But Secrets unraveled and Lexia learnt who she really was.

Follow Lexia as she runs from her Mother and the fate she set for her.
Can Lexia fight the Darkness within her?
Can she have the ‘happily ever after'” she wants?
Only one thing is certain, sacrifices will be made and lives will be lost.

The Hunters fired at Caden as he disappeared from sight. Lexia took a second to

think of her friend before she turned, and walking towards the Hunters, she fired the rounds in the gun taking down three of them. Pulling the knife from her boot, she felt the rush through her veins, making her smile. Lexia’s dark side came out to play, her mind cleared of all thoughts but one, to kill.

As the sharp blade sliced through flesh, Lexia marvelled at the ease of killing; it felt like second nature and as the Hunter flowed through her blood. She didn’t feel the pain as a knife sliced across her thigh, she didn’t even flinch. She spun around, slicing the knife through her attackers; the hilt of the blade carried on, colliding with the Hunter behind her. As he dropped to the floor; Lexia ran to the fence, scaling it with the ease of a cat.

She landed in a crouch and set off sprinting in the direction she’d heard Caden run. As she raced through the streets, the sound of sirens sounded in the distance. Lexia stopped at the end of the street; she had no idea where to go, she’d only left Caden’s house once. She stood in silence and closed her eyes, the noises around her filled her mind: police sirens, the distant hum of engines, the quiet chatter from early morning risers, and then to her right, the faint noise of pounding feet.

Lexia ran, spreading out her senses but couldn’t feel any danger. “Where are you, Doc,” Lexia mumbled to herself.

Her heart started to race as she heard the sounds of gunfire. Curtains started to open around her. She crossed the road, her feet pounding on the pavement, and as she rounded the corner, Lexia felt the danger she was running toward. Caden, please be okay!

Caden stood in a car park cornered, his shoulder had started to bleed again from the fighting he’d had to do but now he was out of luck. Ten Hunters walked towards him, their dull gold eyes hungered for his death.

He could see now how different Lexia’s eyes were from these Hunters around him. Theirs held no life, where Lexia’s shined bright, sparkling with the power that ran in her blood.

“Tell us where the girl is and we’ll kill you quickly,” one Hunter said to him.

Caden smiled at the tall dark haired hunter closest to him. If he was going down, he’d go down fighting. If he shifted now his shoulder would rip open again and he could bleed to death before he found help, but right now it was his only option.  He’d never been the best fighter in his human form. He’d always kept his shifter side separate, not like Lincoln whose cat always lurked close to the surface, ready to strike.

“Have it your way then,” said the dark haired Hunter with a smile.

As Caden shifted he saw Lexia run around the corner. He looked at her now through his leopard eyes as she sneaked behind them. The first Hunter she reached never heard her coming and the rest where too caught up in attacking him to notice.

He leapt at the tall dark haired hunter sinking his teeth into his neck but he slung Caden off, sending him smashing into the hard concrete floor. He struggled to his feet, growling low as they circled him. Blood flowed from the dark haired Hunter’s neck but it didn’t slow him down and he went for him again, swiping his sword. Caden felt the edge of the blade brush past his fur as he twisted out of the way. He jumped and took down the man to his left; blood rushed into his mouth, exciting the beast that he kept hidden within, fuelling him on, giving him more power as his leopard took control.

Lexia took down Hunter after Hunter, slicing her way through them to reach Caden. As she broke through the circle that surrounded him, she saw the blood that was now flowing from his shoulder. He had a few other shallow cuts that slashed across his side breaking up the dappled pattern of his fur.

The Hunters had them backed into a corner, more had joined them and the sound of police sirens grew louder and louder. Time was running out and Lexia could only see an escape for one of them. She’d never make it over the high fence behind them before the men and women around her managed to have her pinned down. Her blood hummed through her veins; she stood her ground, keeping herself between them and Caden.

“Go, I’ll fight them off,” she said to the leopard at her back. He growled at her; defiance in his eyes. “Please, Caden, they won’t kill me. Go now.”

As he turned to jump Lexia launched herself at the Hunters. She kicked and sliced at the bodies trying to keep her down. They pushed her to her knees but she kept fighting and as her head hit the floor she thought of Lincoln. If only you were here, my pretty panther… 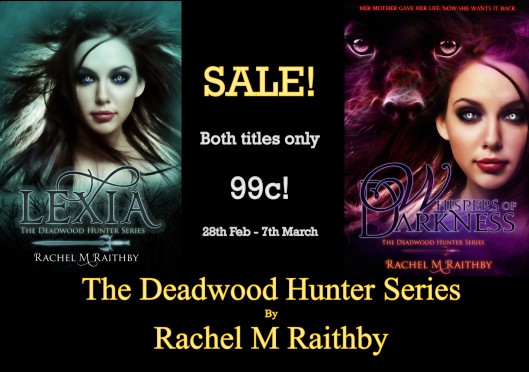